This is a quilt I made in 1997 – one of the first quilts I ever made.  I gave it to my son Dan for Christmas that year when he was nine years old.  He loved it and named it “Fast Forward to the Border”  because he linked the flying geese design to the fast forward button on the VCR player.  (That is how long ago – no DVD invented yet!)  Dan used it daily though the remainder of elementary school, high school and then took it with him through five years of undergraduate study and two years of graduate study.  Not only did he love the quilt, so did Kyle, one of his roommates.  It became the object of a friendly war when Kyle would steal the quilt first to the living room and then to his bedroom.  Dan said he would often lose possession of the quilt for months at a time! After all the constant use, the quilt became somewhat worn.

When Dan moved home after graduating with his MSc, he asked me to fix the frayed binding.  While removing the old binding, I noticed that the backing fabric was also fraying in places, so I opted to add a whole new backing and quilt it over again.  The original quilting was done on my domestic machine and as a beginner quilter, not especially well done or dense.  This time, I mounted the new backing on my longarm and then treated the old quilt as the batting and top.  I quilted it with a tighter design that will keep it secure through the duration of his current degree and beyond.  Requilting it also gave me an opportunity to square it up.  Nineteen years of quilting experience has taught me a lot about quilt construction.  I smiled to see this early quilt is missing a lot of points and that one side was longer than the other.  Nothing could be done about the points; However while it was on the frame, I eased in the fullness on one side so that it was square and true.  I am really happy to have the chance to re-do this quilt.  My son is pleased with the result.

During the summer, while I was hand stitching the binding, his roommate Kyle came to visit at the cottage.  His eyes lit up when he saw the quilt and again teasingly claimed ownership of the quilt.  We all laughed and I have made note of the type of quilt to make Kyle when he gets married!  It feels rewarding to know that my quilting is valued and appreciated. 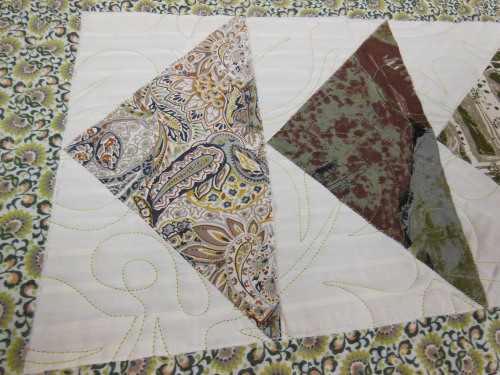 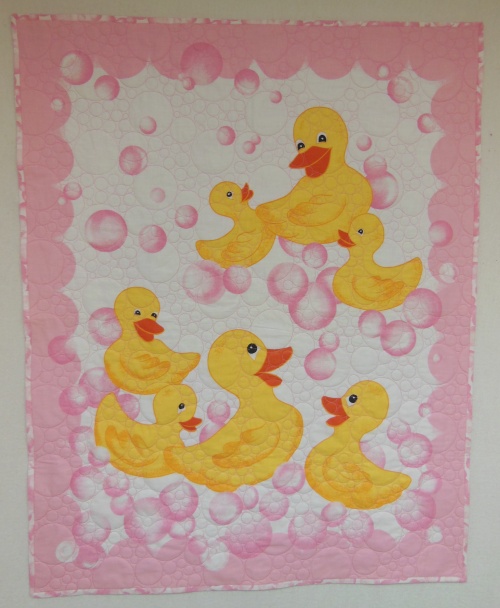 I ran into a phenomenal deal on the fabric for this quilt, so I bought the remainder of the bolt.  Number twelve is the last of the lot.  I am glad they are all done!  It feels like I have worked on this quilt forever!  The good news is that I have many baby quilts finished and ready to give away whenever the need arises.

They were quilted with a digital design called Bubblelicious by Lisa Calle that goes well with the printed panel design.  They were hand bound with a coordinating fabric.

This queen sized quilt began when I was looking for a mindless sewing project while a good friend was dying.  I found it difficult to concentrate on anything more complex and needed to keep my hands busy.  I made these stitch and flip blocks on a fabric foundation and then squared them to 14 inches.  They sat in my UFO cupboard for several years until I decided that they had to be finished into a quilt.

To control the chaos of the blocks and give the eye a place to rest, I sashed and bordered them wit solid black and inserted a red stop border to contain the rambunctious color.    It was quilted with red thread using a digital design called Amish Feather by Ann Bright.  The quilting adds a delightful element that pulls it all together.  The binding is the same red of the stop border.  The wide backing is a muted red and black paisley design.

My friend Amy suggested the name “Joy and Sorrow”.  We feel sorrow at the loss of our friend, but joyful when we look at the creation that came from our period of grief.  While it is not a typical memory quilt, for me it is a strong memorial to our friend.