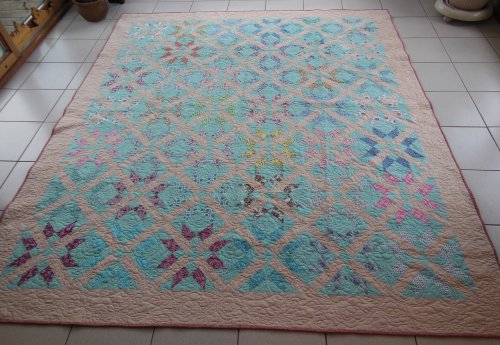 This quilt is made from traditional 30’s prints, which reflect the soft colours of this design.  It was quilted in a sweet rose digital design by Kim Diamond. 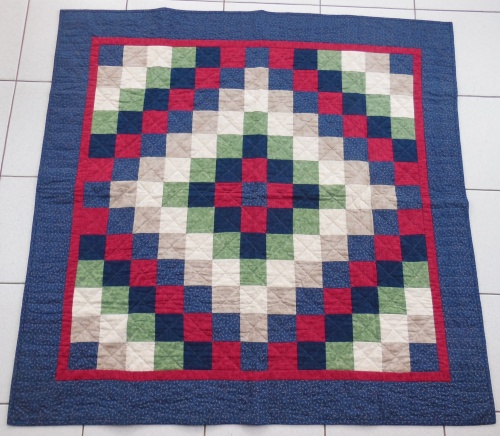 This attractive traditional design is called Trip Around the World.  How fitting that I finished the hand quilting on this lovely little flannel quilt on a trip out east this summer.  The interior was quilted sporadically over the spring and early summer and then I quilted the borders on the trip.  I hand stitched the binding during a few spare moments on the trip.   I added a hanging sleeve to make it convenient for use as a wall hanging.   Flannel is soft and does not hold its shape well for uses like hanging, but it is definitely cosy! 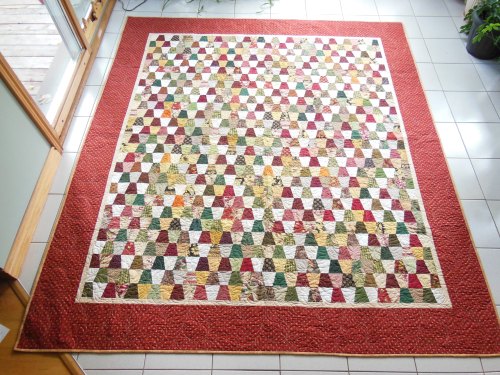 This queen size quilt began when I decided to use up scraps left over from the Winding Ways quilt (2016-17).  I dislike having leftovers as they clog my creativity, so I try to use them up right away.  Using my Accuquilt die, I cut as many tumblers as I could out of the scrap pieces.  Then I went through my scrap bin and found more autumn colored fabrics and cut more tumblers.  I don;t think I used any yardage at all, just scraps.  It is amazing how many scraps one collects over the years!

I strove for a balance of light and dark so I could create contrast between the tumbler shaped pieces.  The pieces were assembled in units of two, then four, then eight and then then into the rows for the quilt.  Fortunately, I have a large table where I can layout the rows to check color balance and separation.  Once he center was done, I added a gold colored inner border and an red and gold print outer border.  It was quilted with a leafy design that adds texture and an autumn theme.

This quilt has been selected by my nephew Charley and his lovely wife Alice as their wedding quilt.  They are patiently waiting until after the provincial competition before they can take it to their new home. 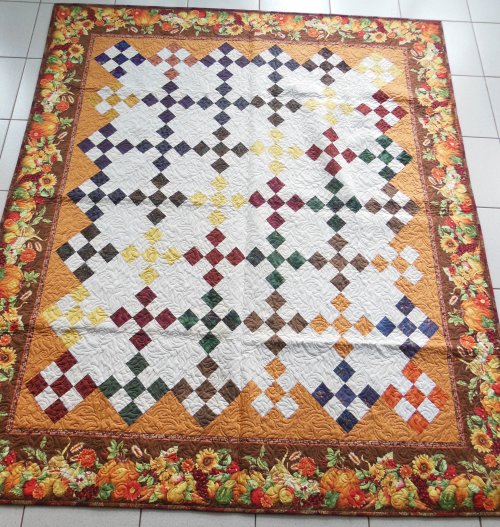 This quilt was inspired by the border fabric.  I bought this fabric at the member boutique at the Quilt Show of the Greater Ann Arbor Quilt Guild in Ann Arbor, Michigan.  What a great sale!  I spent lots of money there and was particularly pleased with this border fabric. (Their show was exceptionally good too!)

The size of the quilt was determined by the amount of border fabric I had.  First I calculated how big I could make the quilt considering the corners had to be mitered to keep the flow of the design.  Once I knew the outside dimensions, then I built the inside of the quilt to fit.  I used some six inch nine patch blocks that came from a Guild exchange of blocks and made a few extra to expand the center.  After playing with several layout options, I selected a lovely rusty-orange fabric for the setting triangles.  It is quilted with  Superior Omni thread in Ginger Spice  using a digital design called Damask by Ann Bright.   I’m pleased with the result.

I have put it with the group of quilts from which I invite brides and grooms to select their wedding quilts.  However, I hope no one picks this one because I like it.  I could live quite happily with this quilt. 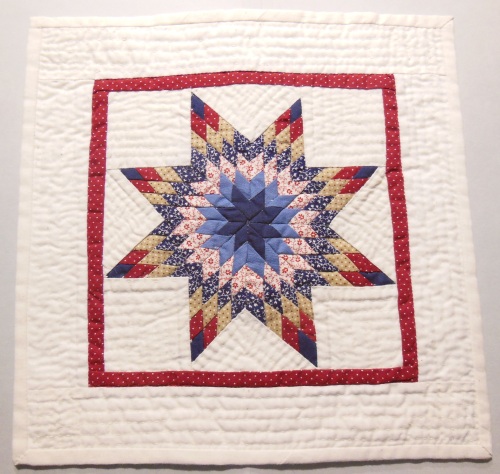 This miniature quilt started from a kit that someone gifted to me.  This ten inch quilt was fiddly to make.  Working with such small pieces made it very difficult to keep the pieces accurate and end up with even star points.  At first glance this star looks great, but I know how uneven the points actually are!  If I were to do this over, I would foundation piece the star sections so they are perfectly accurate.  A foundation would help stabilize the sections and prevent distortion.  With every quilt I  make, I learn something!

After piecing the top and I decided to hand quilt it.  I got tips from Elizabeth Schneider, a well known local miniaturist.  She is a lovely lady and very encouraging.  Elizabeth taught me how to tack the points by hand and then quilt the setting squares, triangle and borders.
One great tip from Elizabeth was to take a regular batting and to peel it back through the centre to create a very thin batting that is perfect for miniature quilts.    It worked wonderfully!  Elizabeth is so inspiring, I will definitely make another miniature.  I had to name this quilt after her.

I entered this miniature quilt in several fall fairs and won first prize each time it was entered.  That is encouraging and I will make another.  Surprisingly, my hand stitching group has asked me to teach a class in making this same quilt.

This queen sized quilt was inspired by some vintage Dresden Fan blades I found in my UFO cupboard.  I wanted to make them modern, so this is the result.

The pale peach background fabric is a wide fabric that I bought in the night market in Cairo, Egypt.  I have great memories of that shopping trip when a friend and her doctor-fiance negotiated for me in Arabic.  He advised me to stay silent because as a man, he could get a much better price from the male vendors.  He did get an awesome bargain for me!

The Dresden Fans are appliqued onto the background in a non-traditional asymmetrical arrangement that gives the quilt a fresh, modern appeal.  The broken inner border is also a modern element.  The quilting design is an edge to edge digital pattern called Dresden Fan by Kim Diamond of Sweet Dreams Quilt Studio.  It is stitched in a peach thread that matches the background and backing.  The same fabric French fold binding is applied to the front and hand stitched to the back. 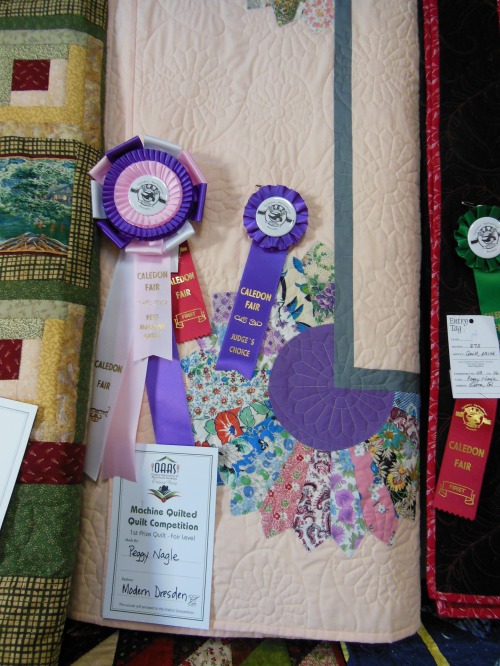 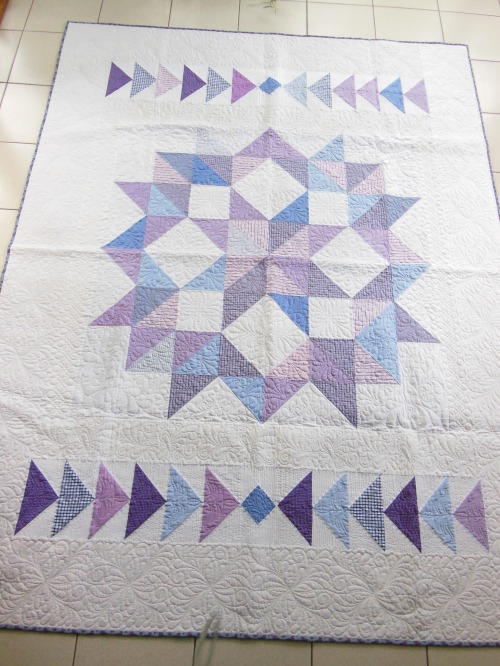 This quilt was inspired by some men’s shirting prints I received from a Toronto shirt factory that makes upscale shirts.  I made a bunch of half square triangles and set them together in a Carpenter Star design.  I opted to make the flying geese to increase the size of the quilt.  With extra negative space, it made a great canvas for fancy quilting, so custom quilting with feathers seemed to fit my vision.  The quilting design in the blocks is Barbara’s Feather’s by Donna Klienke, the pattern in the border is Naysa’s Feathers by Christy Dillon and the design in the flying geese is a simple feathered sash I created.  The background of the flying geese is freehand matchstick quilting.  It is single bed size.

I like how the blank space shows the fancy quilting well.  This is one of my personal favourites of the year. 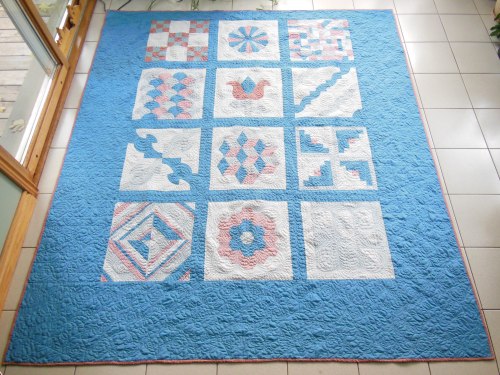 This quilt could tell a story! When a local woman was cleaning out her house to move, she offered me a box of fabric.  Of course I cannot refuse fabric!  When I went to pick it up, I explained that I would use the fabric for quilting,  Once she heard I was a quilter, she insisted on giving me two of her mother’s quilts.  They had been well used and she did not want to throw them out, but absolutely could not take them with her on the long move across the country. 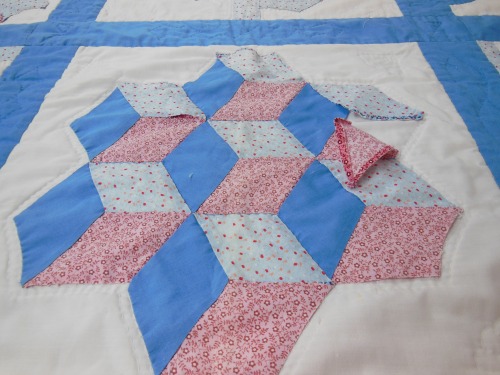 The quilt needed repair, so I started with each block, hand stitching broken seams and reattaching some of the applique designs. You can notice the degree of fading exposed by the loose appliques. 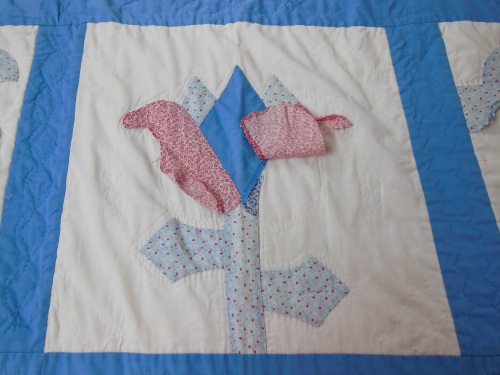 One block, I completely replaced.  I found a complementary fabric in my stash and made a new block.  Can you tell which block is new? After the top was repaired, I then mounted it on the longarm and quilted it densely.  The blocks are a feather design called Golden Topaz by Donna Klienke of One Song Needle Arts.  The sashing is a formal feather design I created and the border is a feathered rose pattern.   The machine stitching will hold it together and give the quilt a new and longer life.  This quilt will be a donation quilt, most likely to one of the Syrian refugee families we are expecting to arrive in our community soon. 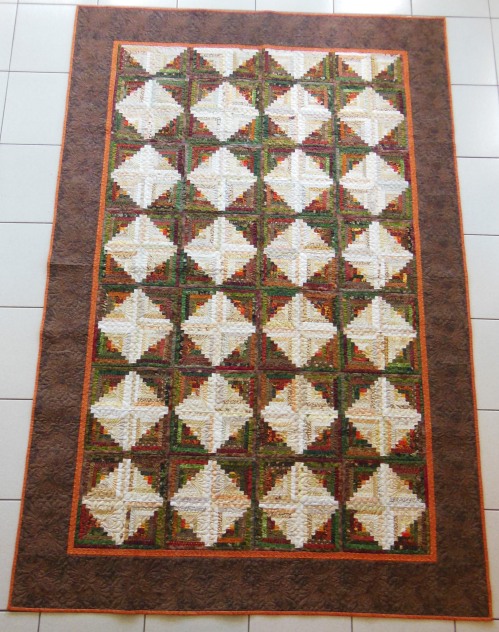 This quilt is made of leftover blocks.  Yes, Really! Ninety Six leftover blocks!   When I made my Autumn Log Cabin (2013-20), I did not want to count the many tiny strips that went into these blocks.  I counted the first pile and then just cut strips till the piles of fabric seemed even in height.  Then I chain stitched the tiny logs into blocks.  I was aware I had cut logs to ensure I did not fall short.  The problem with not counting is that I cut a LOT extra and did not realize how many extra blocks I had made until I assembled the Autumn Log Cabin.  I ended up with 96 extra blocks!  That is a lot of cutting and sewing!  But the silver lining is that I had enough leftover for a twin sized quilt.  So making this quilt was quite painless, given the blocks were already constructed and just waiting to be assembled.

This quilt differs from the first because of the quilting thread.  I selected a gold toned thread for the blocks and an orange thread for the borders, both of which warmed up the overall look of the quilt.  I was quite happy with the resulting quilt. 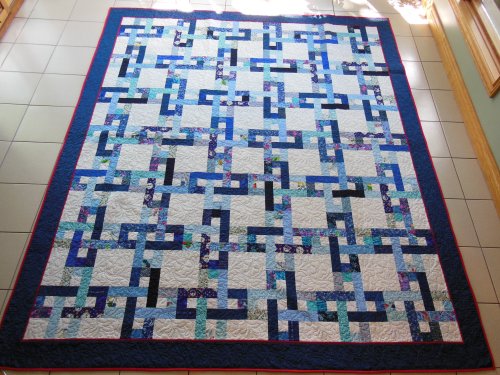 This quilt was made from a traditional pattern called Double Chain, which was printed in 1881 in Godey’s Ladies Book.  It is fairly simple to piece, once you figure out the best way to lay your patches to avoid piecing confusion.  It uses the partial piecing technique, which is fairly simple in this case.  This made a nice dent in my stash of light and dark blue scraps!

The quilting design is called Along the Way, by Anne Bright.  It was done in a dark turquoise thread which gave nice definition and texture to the quilt.

This quilt won Grand Champion, Machine Quilting at the 2014 Caledon Fair and the 2015 Drayton Fair.  It won second place at the District 7 competition in 2015.  It now goes to Michael and Rory for their wedding quilt.